By Jackie Weaver of The Ellsworth American
August 1, 2015

Currently his gallery is featuring the work of three celebrated photographers who also happen to be friends —Cherie Hiser, Henry Horenstein and Mariette Pathy Allen.

“I wanted to break away from strictly exhibiting my own work and begin to include the work of other photographers,” said Kotula, whose gallery adjoins his home in the Gouldsboro village of Prospect Harbor. 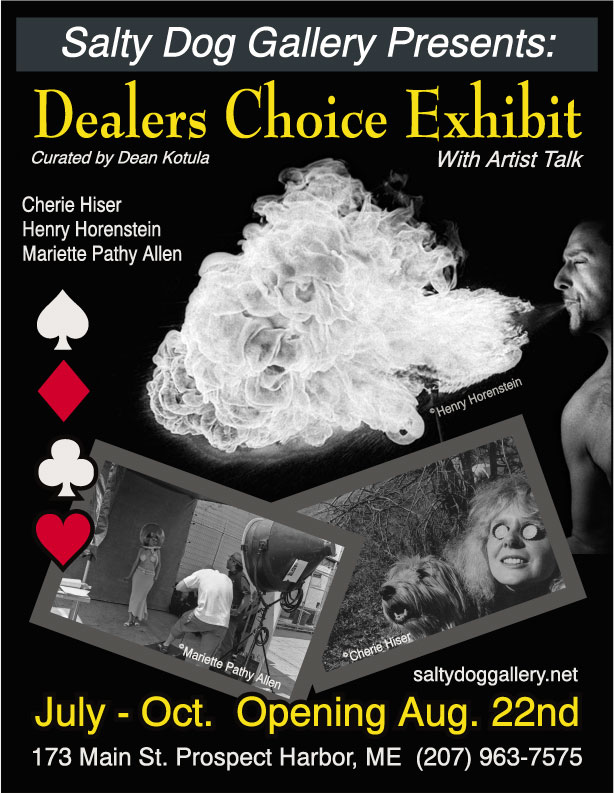 He said the photographers featured in the “Dealer’s Choice Exhibit” have worked at their craft for more than three decades, developing an international audience along the way.

Their images are provocative — some might say a few of the photographs are disturbing — but they are decidedly unflinching.

“They take risks with their chosen subject matter, not only in documenting subcultures, but in presenting some of the least celebrated people in life with affection,” Kotula said.

“They are not ‘captured’ images, but images which rely on sympathy, a mutual susceptibility and are nearly symbiotic gestures revealing the subject and photographer in equal parts.”

Cherie Hiser’s mentors as she entered the visual world included luminaries such as Minor White, Ruth Bernhard and Imogen Cunningham.

That exposure, so to speak, stood her well as she moved to Aspen, began work as a newspaper photographer and then, in 1969, founded The Center of the Eye — which gained an international reputation as an alternative educational community in the arts.

Among the photographers who came to teach were legends such as Henri Cartier Bresson, Cornell Capa, Jerry Uelsmann, Nathan Lyons and Robert Heinecken.

The Center of the Eye was the basis for the Maine Photographic Workshops founded in 1973.

In 1998, Hiser was one of 20 semifinalists for the national Humanitarian Photographer of the Year Award.

On display at the Salty Dog Gallery will be images from Hiser’s “Self Portrait” series, diptychs from her “Odyssey of the Invisible” series as well as her series on aging.

Henry Horenstein has been a professional photographer, teacher and author since the 1970s.

A professor of photography at the Rhode Island School of Design, his work is collected and exhibited internationally.

He studied with Harry Callahan, Aaron Siskind and Minor White, all of whom, he said, opened his sensibility to good composition, interesting light and compelling subject matter.

The photographs he has on display are from his “Animalia” series as well as images from the “SHOW” series.

Unlike photographing humans, Horenstein said, one can’t tell an animal what to do.

“You must be very patient and wait, hoping your subject will do what you want it to do, or maybe something else unexpected that might make a good picture.”

Mariette Pathy Allen was a painter who became a photographer after taking a class with Harold Feinstein.

Allen was quickly hired by the State Museum of New Jersey to capture “The Face of New Jersey” in 1968 followed by “People With Art,” an ongoing series about people making art.

Her photography took a new direction in 1978 while in New Orleans for Mardi Gras.

“By fluke, I stayed at the same hotel as a group of cross-dressers,” she said. “They invited me to join them for breakfast on the last morning. When I took a group picture, I was moved by the experience of looking into the eyes of one of the people in the group. I felt as if I was looking at the essence of a human being rather than a man or a woman.”

In the 1990s, she expanded her work to focus on female-to-male and male to-female transsexuals.

Her photographs on exhibit at Salty Dog Gallery are from her “People With Art” series; “Fantasy and Flowers” and “TransCuba” portfolios.