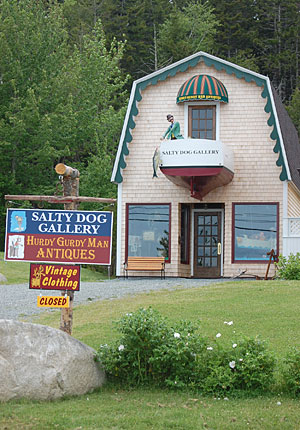 An organ grinder playing in Bombay, India, many years ago was the inspiration for a new shop and photo gallery in Prospect Harbor, Hurdy Gurdy Man Antiques and The Salty Dog Gallery.

Certain seminal experiences reemerge later in life. For Dean Kotula it was hearing an organ grinder perform with a monkey in Bombay (now Mumbai), India.

That moment years later led him and his partner, Diane Ellaborn, to name his vintage clothing and antiques shop in Framingham, Mass., “Hurdy Gurdy Man Antiques,” after Donovan’s 1968 song about an organ grinder.

Kotula, along with Ellaborn’s support, has transplanted and refashioned the business in the scenic village of Prospect Harbor. The Salty Dog Gallery on the second level features photographs.

“I’ve been doing photography for more than 30 years and have exhibited in a number of galleries,” said Kotula, “but I’ve never been big on the hustle and bustle of marketing.”

He said he decided to simplify the exhibition process by creating a venue where he could curate his own shows, along with the work of other photographers, with “time-tested images, those that have never before been seen, and newly inspired work.”

Kotula also plans to showcase the work of other photographers, among them friend and mentor Cherie Hiser of Portland, Ore., founder of the “Center of the Eye” photographic workshops held in Aspen in the 1960s.

The shop on the first level is as eclectic as its owner. The overhead awning and deck is the stern of a lobster boat built by local boat builder Kevin Snyder, water line and all.

Inside the shop is a mechanical organ grinder, gift items for children and adults, many with a nautical theme, antiques, vintage clothing, jewelry, custom made chocolate and a large selection of cards.

Most prominent is the 10-foot-tall paper mache hula dancer at the rear leaning against a mural designed to simulate the view from a submarine.

The hula dancer was among a dozen such figures featured at the 1964 New York World’s Fair.

Kotula, a native of Minnesota, studied photography at the Art Institute of Boston and apprenticed in 19th century photographic processes, among them albumen, kallitype, palladium and platinum, with Robert Steinberg.

Photographs currently on display range from his days as a chimney sweep in Boston, time spent in Oregon working as a shipyard machinist, his years working for the National Marine Fisheries Service as a fisheries inspector aboard foreign factory trawlers to recent years documenting the Schoodic Peninsula.

Kotula said he accepts commissioned work and has a particular interest in doing children’s portraits, integrating vintage clothing and props.

He continues to shoot with film and large format cameras but also creates digital images. Kotula said he strives for the same approach his grandfather used in employing a divining rod to locate a vein of water.

“My grandfather would wait until an intense vibration would pass through his stick and up his arms and only then did he know he had water,” he said. “Similarly, it is only when I feel emotions thundering inside of me and all my senses are locked into place that I know the time is right to release the shutter.”